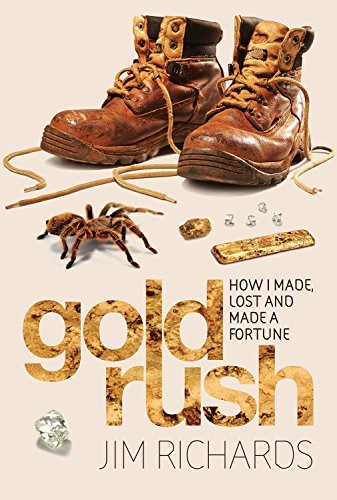 When in 1519, during the Spanish invasion of Mesoamerica, Hernan Cortes was asked by the Aztecs why he and his Conquistadores prized to the point of obsession a soft, yellow, decorative but otherwise useless metal, he answered, ‘Because I and my companions suffer from a disease of the heart that can only be cured by gold.’  Nearly five-hundred years later, exchanging his rifle for a geologist’s hammer, as paratrooper Jim Richards sets off to seek his fortune in South America’s gold rush, he echoes Cortes’ psychological insight, ‘Would I own the gold or would the gold own me?’

Gold Rushis a classic modern, rags-to-riches, full-throttle adventure that only the truly crazed would contemplate.  It is scarcely believable, but for the fact that I know it’s true. I confess to an inbuilt bias from the outset.  I was at Sandhurst with Jim and we served as officers and colleagues in the 1stBattalion The Parachute Regiment.  As the 1980s drew to a close so too did the Cold War.  For our generation adventure beckoned elsewhere. Many left the army to follow their dreams, Jim foremost among them.  I recall him announcing one day that he was leaving to prospect for gold in South America. Most of us put short odds on his survival: murder, mugging, sex slavery and alcoholism were deemed likely outcomes. The Parachute Regiment was not an empathetic outfit.  Over quarter of a century has elapsed between Jim’s departure and the emergence of his extraordinary memoire.

Despite my declared bias, Gold Rushis one of the best real-life, rip-roaring adventures I have read. Combining two of Christopher Booker’s seven basic plots (the Quest and Rags-to-Riches) Jim’s account is a classic hero’s journey: the call to adventure; crossing the threshold of the unknown; facing the dragons on the road of trials; entering the dark night of the soul; metamorphosis; discovering the gift; return to the kingdom.  Paradise lost.  Paradise found.  It resonates with our deepest archetypes.  Therein lies its power.

Part travelogue, part memoire and part didactic, Gold Rushis authentic.  Jim’s voice is recognisable as we follow him out of the army and through the fly-blown shanties of Central America en routeto the gold and diamond fields of Guyana. The narrative is crisp, economical and observational, garnished with the inevitable black ‘Para’ humour.  The account is more than a personal odyssey. Necessary technical information is seamlessly spliced into the narrative.  For the lay person it is also a fascinating gallop through the basics of geology and the history of prospecting – the level of abstraction and detail are accessible and pitched as though Jim was explaining it over a few beers.

Driven by an obsession to make his fortune he lays everything on the line: a promisingly dull but safe career; his girlfriend; his reputation and his life.  Risk begets reward.  The narrative plunges us deep into the mosquito-infested jungles and hazard-strewn rivers of Guyana, where lack of funds force Jim to work for established mining companies before striking out on his own.

This is a recurring theme during a roller-coaster ride from Guyana, to Australia, Laos, Indonesia, Pakistan and back to his adopted home in Perth. For the best part of two decades the dream of floating and running his own company – playing in the premier league – remains elusive.  Dr. Angela Duckworth defines grit as ‘persistence and perseverance in the face of adversity’.  On her grit scale Jim scores a five out of five.  Yet life in the trenches furnishes Jim with a bedrock of practical experience and invaluable insights into human nature that shape the final outcome.

But Gold Rushis much more than an adventure story.  It is beguilingly profound.  Jim has a keen eye for the human condition.  There is considerable self-reflection and examination of his own frailties.  On occasion his moral compass is challenged as the lure of riches, corporeal and mineral, clashes with his values.  This is as much a Kiplingesque story of an inner journey to manhood as it is a ripping yarn of triumph and disaster.  His empathy for the little people he encounters struggling on the margins of a globalised world is strong.  Why wouldn’t it be?  As an officer he was a caring and competent leader of men.

At journey’s end, I admit to a tear in my eye when success finally catches up with Jim.

Although I found Gold Rushin the travel section of a well-known bookstore, it would sit equally well, if not better, on the personal development shelves.  Jim’s narrative unpacks the codes to high achievement contained in success classics such as Napoleon Hill’s Think and Grow Rich, Wallace Wattle’s The Science of Getting Rich and George Leonard’s Mastery.  If I was to run a master class in success, Gold Rush would be the exemplar text I’d use.

In Tombstone in the Valley of Death,South American writer Rollo Diez remarks, ‘Living intensely makes every effort and every sacrifice worthwhile.  Living half-way has always been the function and the punishment of mediocre people.’

There is nothing mediocre about Jim.  Gold Rush is a five-star must read.