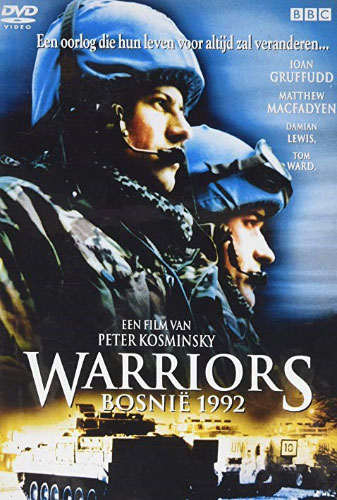 Peter Kosminsky’s Warriors is a two-part BBC dramatisation of the first British UN deployment to Bosnia in 1992-3.  At the time of its release in November 1999 the Balkans was still highly topical.  The Bosnian war had been over for four years and the NATO bombing of Kosovo and rump-Yugoslavia had ended six months previously.  The wars of the Balkans were seemingly over.  War crimes trials were beginning.  Closer to home, a two-year MOD investigation into my own role in the Balkans was wheezing to a slow conclusion.  My own book about the very events depicted in Warriors was still with the MOD censors.

By the time I first saw WarriorsI had lived through the Bosnia nightmare three times over: once out there; once in the process of educating my legal team; and once in writing my own account. Consequently, I didn’t take to it. My reality demanded legally precise detail not a work of emotion and high drama.  Now, sixteen years later, I can look at Warriorsthrough slightly different eyes. I am still irritated in a pedantic ex-military way by the occasional lack of authenticity.  One or two of the senior British officers seem to have escaped from the pages of a Flashman novel, while Serb and Croat militia commanders are rendered as two-dimensional pantomime villains. However, these are but minor criticisms of a genuinely engaging emotional sledgehammer.  This is not a war film.  It is a film about people in war and what war does to them. It is a psychological roller-coaster.

Based very closely on the Cheshire Regiment’s own experience as the first British battle group assigned to the fledgling United Nations Protection Force (UNPROFOR) in Bosnia, Warriors follows the personal journeys of two junior officers and two private soldiers from pre-deployment to homecoming.  At over two-and-a-half hours long, the film is linear.  It stitches together the major events of that tour in a conveyor belt of horror and raw emotion.  In two parts, it examines the futility and inevitable contradictions of sending peacekeepers into an environment where there is no peace to keep. Told that the mission was to protect food convoys a soldier wryly remarks, ‘I thought we were here to salve the world’s conscience.’  An allusion to the CNN effect.  What the Bosnians really needed were arms and supplies to defend themselves against ethnic cleansing.  What we gave them was food and, thus, stood accused of fattening them up for the inevitable slaughter.

Warriorssandwiches the chaotic and disorientating savagery of neighbour pitted against neighbour between the calm affluence of post-Cold War, pre-digital Britain – order and chaos a commutable distance apart.  The sectarian complexities in Bosnia were described by one UK Special Forces commander I knew as ‘Northern Ireland in outer space’.  At UN headquarters in Zagreb an anonymous note read, ‘If you think you know what’s going on, you haven’t been properly briefed.’

Kosminsky skilfully avoids trying to educate the viewer as to who was murdering who. Yet the detail is meticulously researched, recognisable to anyone who was there: the columns of refugees; the sniping of Corporal Wayne Edwards in Gornji Vakuf mirrored in the shooting of Private Skeet; aggressive stand-offs at checkpoints; the slaughter of civilians at Gornji Vakuf and Ahmici; the graffiti of racism; rag-tag militias; the bizarre and casual calculus of body exchanges.  On the phone to his pregnant girlfriend, Damien Lewis’s character can’t talk about the events at Ahmici that day, ‘We’ve been doing some clearing up.’ She thinks he’s been cleaning his room.

But these events are merely the backdrop to examining the close relationships that developed between the liaison officers and their female interpreters. This is the most authentic aspect of Warriors.  In Minka and others I see the real-life Suzana Hubjar, Adrijana Miller and Svetlana Puzovic – brave beyond belief and calm under fire.  The liaison officers relied heavily on their interpreters and they in turn relied on the liaison officers for protection.  The bonds of trust were deep, often erroneously confused for romantic liaisons.  Subjected to racial and verbal abuse from their own countrymen, and occasionally to hostile fire, these interpreters, often very young girls, kept the show on the road.

Captain Richard Gurney’s interpreter Almira introduces us to Balkan superstition, ‘This land is cursed’. It seems like a sop to melodrama were it not for the fact I too encountered a Mordor-like war zone dripping with superstition, fatalism and a cult that venerates the dead more than the living. I called it necrowar.  Sarajevo was its necropolis.  In the Gulf we fought for oil.  In the Balkans they fought over bones.  Despite a thin veneer of Abrahamic religiosity, the underlying psychological drivers are deeply pagan and mystical.  Like Almira, one of our interpreters, Dobrila Kalaba, had a premonition that she wouldn’t survive the war.  She was shot dead by a sniper from a distance of fifty metres while eating a strawberry.  Shot through the head.

Not all casualties occurred in the Balkans.  As Warriorsmakes clear, the returning peacekeepers experience difficulties adjusting to an uncomprehending British population tuned out to the CNN factor and turned off by compassion overdose.  Each struggles to come to terms with an experience that leaves them as frustrated at leaving people to die as they were at being unable to do anything to prevent the killing unfolding before their eyes, voyeurs in someone else’s 3-D snuff movie, ‘I wouldn’t give that job to a dog.’   Relationships and careers fall apart.  Some drift back to the Balkans as aid workers, unable to wean themselves off war’s narcotic grip.  Some contemplate suicide.

Warriorsis uncompromisingly bleak. The absence of a dramatic music score, unsentimental dialogue and arresting imagery add to its gritty realism. At journey’s end there is no happy ending.  No classic resolution.  No jingoism.  No self-congratulatory backslapping.  No heroes’ welcome. It is a metaphor for Bosnia – good intentions cruelly dashed.